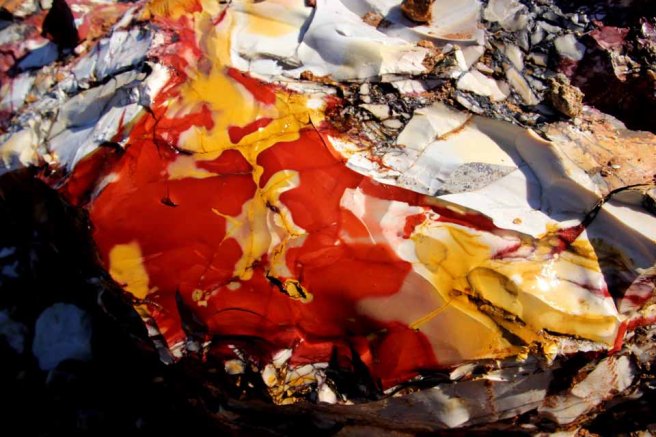 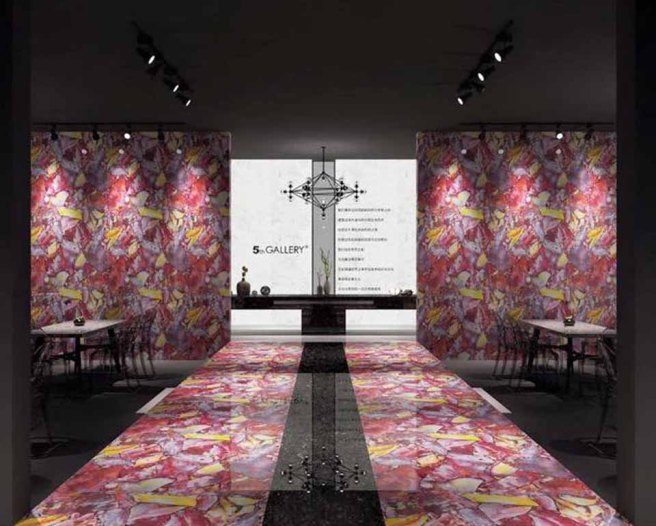 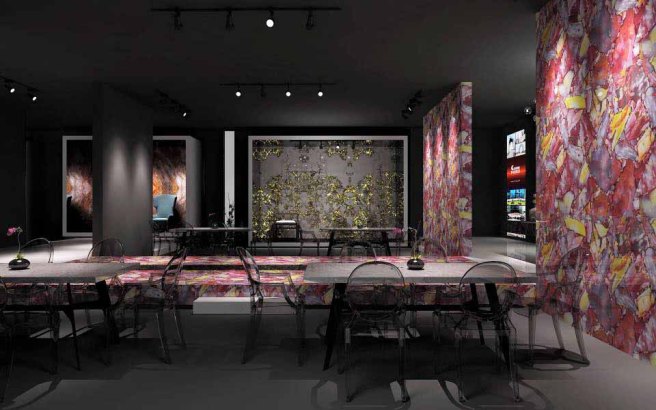 Mookaite is a silicified porcellanite or Jasper formed in the sedimentary environment of the ocean floor.

Siliceous ooze is a siliceous pelagic sediment that covers large areas of the deep ocean floor. Siliceous oozes consist predominantly of the remains of microscopic sea creatures, mostly those of diatoms and radiolarians.

The silica material from which it is derived comes from the abundant zooplankton of the Radiolaria family.

Radiolarians have a highly geometric skeleton made of very fine silica, this is what forms Mookaite. 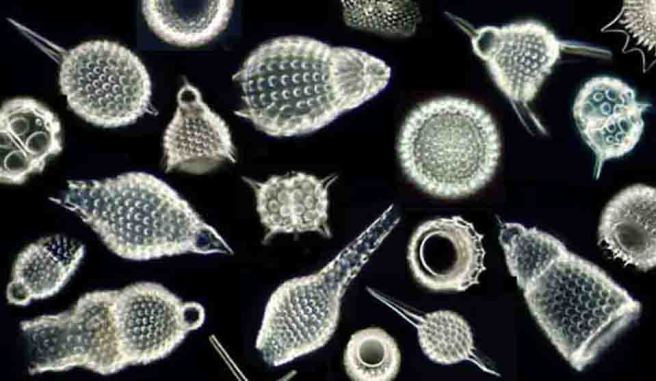 The term ‘Mookaite’ is an unofficial, locally coined name for a silicified porcelanite which forms in the weathering profile of a geological formation known as Windalia Radiolarite (WR), a Lower Cretaceous siltstone that outcrops over much of the Carnarvon Basin in Western Australia.

Mookaite is variously, and incorrectly, described as chert, opalite, chalcedony or combinations of the three 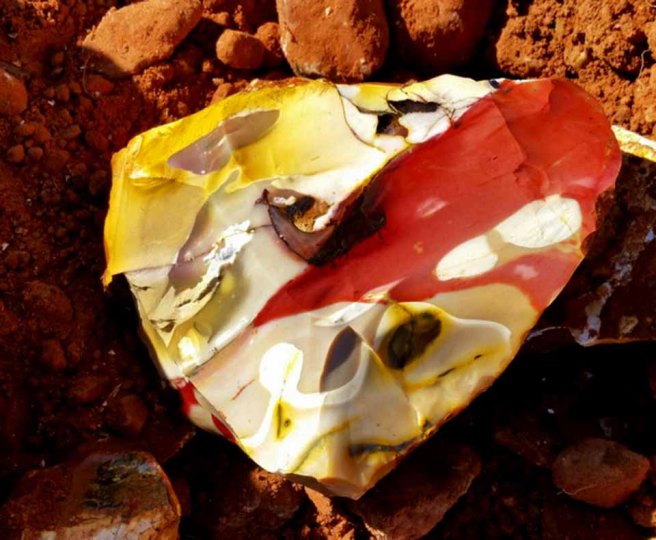 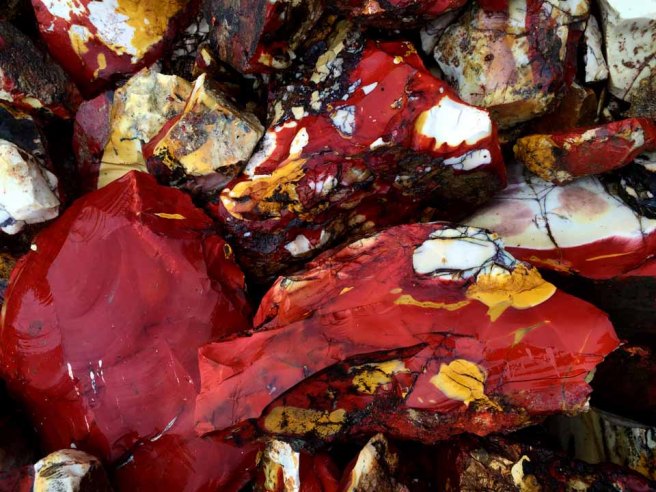 This material is well known for producing attractive “picture stones” “Mookaite” only known source is Mooka Creek, on the western side of the Kennedy Ranges, 180 kilometres east from Carnarvon. Mookaite is not a recognised species, but a locally coined name used to describe the material. A useful and succinct explanation of this can be found by typing mookaite into the mineral search field on Mindat.

It has been quarried from the area since the mid 1960’s by local specimen miners. As of 2013, three specimen miners hold leases over most of the area. The area mined is restricted to a small zone along Mooka Creek, east of the Mardathuna Track. 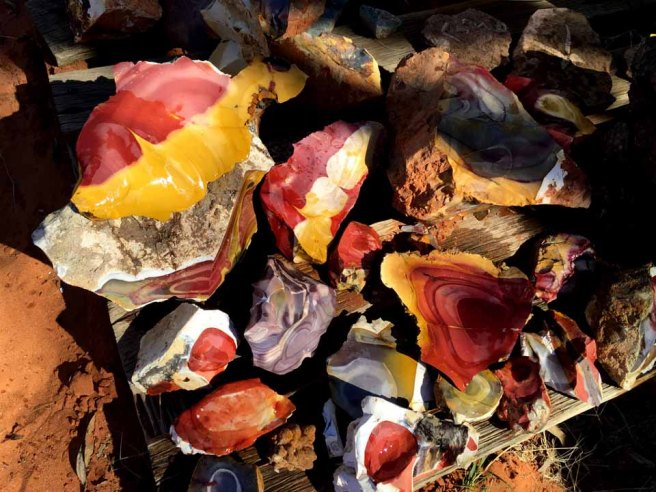 Microscopic examination shows Mookaite consists of the remains of tiny creatures known as radiolaria, that have an unusual skeletal structure of opaline silica. Billions of these were deposited as sediment in the ancient sea-beds of shallow seas. When the seas retreated, these sediments were cemented into solid rock by the silica. 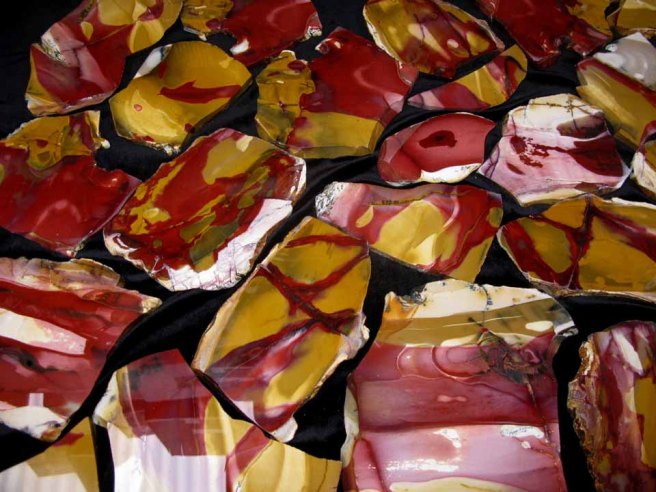 It is found in the Windalia Radiolarite, a uniform white weathering rock, with poor blocky bedding. While the radiolarite is widespread, mookaite is only found in a restricted area where the effect of surface or near surface silicification have resulted in the development of cherts and porcellanites. Iron oxide rich groundwater activity has caused the colour mottling and varicolouring of the cherts.

Mookaite is mainly composed of cryptocrystalline silica, with radiolarian microfaunal structures, the colour caused by varying concentrations of hematite/goethite granules.

It is found in a range of bright colours including reds, white, tans, purples and pinks. It is a popular slabbing material, and is commonly available in Western Australia, and sold around the world. The Carnarvon Tourist Bureau states the deposits are off-limits to fossickers, as they are leased by specimen miners.

‘Brecciated mookaite’ is found in the same deposits but at greater depth.
These are also often slabbed, and show fragmented mookaite, with areas of clear translucent opal between the fragments. 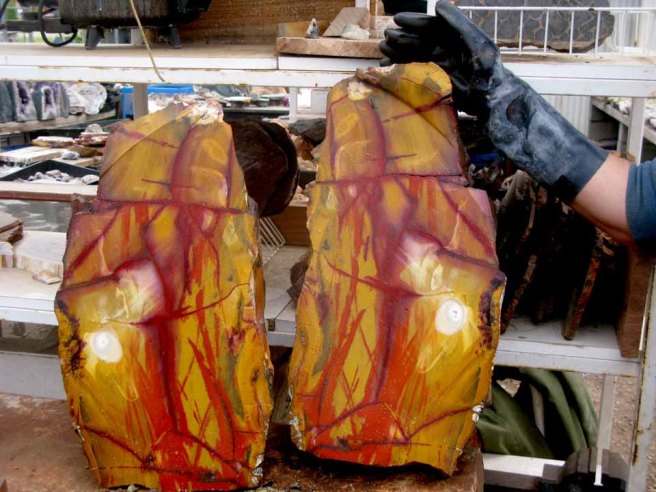 Pink opal’ is a marketing name, but is simply a different form of mookaite. It is an extremely bright pink opalized radiolarite. The prospect (known as Binthalya prospect) is 1 kilometre south of the Mooka Creek deposits. It is found as a dominant horizontal bed within zones of coloured porcellanites located beneath a surface brecciated zone of iron, silica and pink opal fragments. The pink opal often shows liesegang banding, and microcrystalline quartz filled vugs.

The area is also known for fossilised wood known as Toredo Wood. These also come from the Radiolaria Formation during the Cretaceous Period. The original wood is of several varieties but the main one is a conifer called Acaucaria. During the Cretaceous Period, clams attacked the wood after it had fallen in water. The wood settles to the ocean floor and into mud. The boreholes are filled with light coloured radiolarian sediment, and sometime later petrification begins. Casts of ammonites, belemnites and bivales are also locally present.