Crystals from our mines 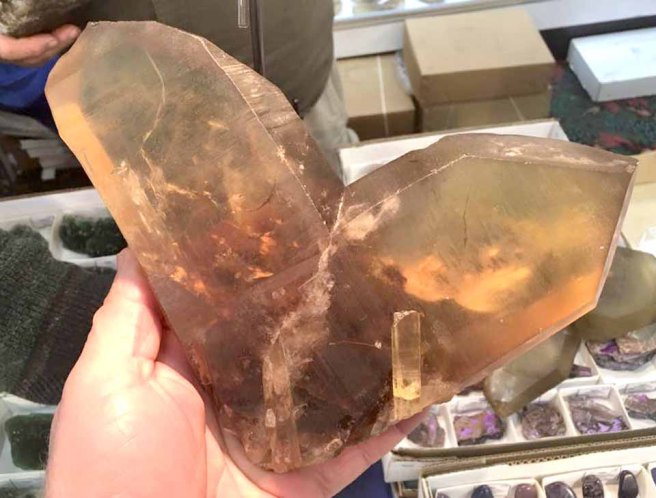 A crystal or crystalline solid is a solid material whose constituents, such as atoms, molecules or ions, are arranged in a highly ordered microscopic structure, forming a crystal lattice that extends in all directions. In addition, macroscopic single crystals are usually identifiable by their geometrical shape, consisting of flat faces with specific, characteristic orientations.

The scientific study of crystals and crystal formation is known as crystallography. The process of crystal formation via mechanisms of crystal growth is called crystallization or solidification. The word crystal is derived from the Ancient Greek word κρύσταλλος (krustallos), meaning both “ice” and “rock crystal”,[1]from κρύος (kruos), “icy cold, frost”.[2][3]

The scientific definition of a “crystal” is based on the microscopic arrangement of atoms inside it, called the crystal structure. A crystal is a solid where the atoms form a periodic arrangement. (Quasicrystals are an exception, see below.)

Not all solids are crystals. For example, when liquid water starts freezing, the phase change begins with small ice crystals that grow until they fuse, forming a polycrystalline structure. In the final block of ice, each of the small crystals (called “crystallites” or “grains”) is a true crystal with a periodic arrangement of atoms, but the whole polycrystal does not have a periodic arrangement of atoms, because the periodic pattern is broken at the grain boundaries.  Most macroscopic inorganic solids are polycrystalline, including almost all metals, ceramics, ice, rocks, etc. Solids that are neither crystalline nor polycrystalline, such as glass, are called amorphous solids, also called glassy, vitreous, or noncrystalline. These have no periodic order, even microscopically. There are distinct differences between crystalline solids and amorphous solids: most notably, the process of forming a glass does not release the latent heat of fusion, but forming a crystal does. 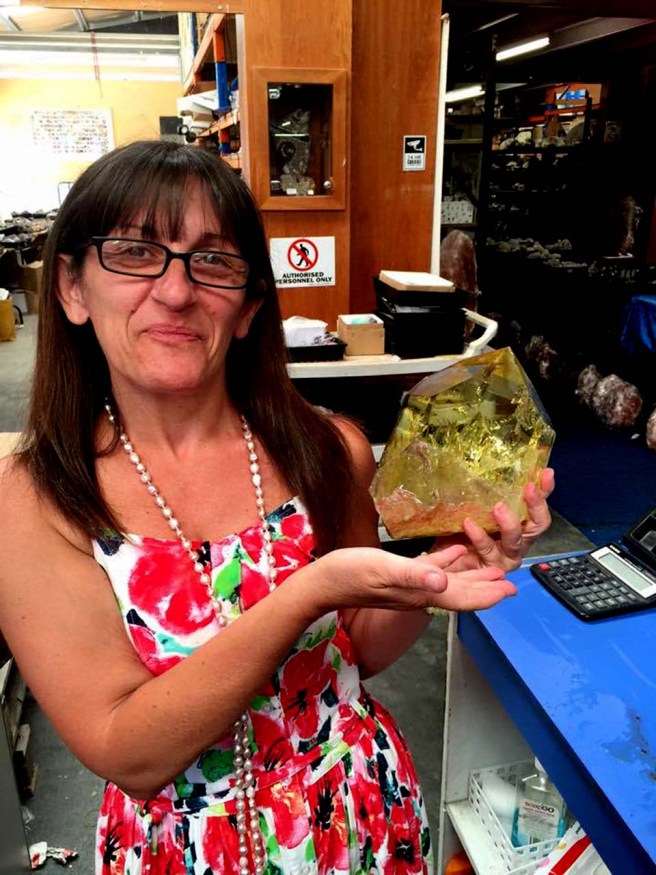 A crystal structure (an arrangement of atoms in a crystal) is characterized by its unit cell, a small imaginary box containing one or more atoms in a specific spatial arrangement. The unit cells are stacked in three-dimensional space to form the crystal.

Euhedral crystals are those with obvious, well-formed flat faces. Anhedral crystals do not, usually because the crystal is one grain in a polycrystalline solid.

The flat faces (also called facets) of a euhedral crystal are oriented in a specific way relative to the underlying atomic arrangement of the crystal: They are planes of relatively low Miller index.[4] This occurs because some surface orientations are more stable than others (lower surface energy). As a crystal grows, new atoms attach easily to the rougher and less stable parts of the surface, but less easily to the flat, stable surfaces. Therefore, the flat surfaces tend to grow larger and smoother, until the whole crystal surface consists of these plane surfaces.

One of the oldest techniques in the science of crystallography consists of measuring the three-dimensional orientations of the faces of a crystal, and using them to infer the underlying crystal symmetry.

A crystal’s habit is its visible external shape. This is determined by the crystal structure (which restricts the possible facet orientations), the specific crystal chemistry and bonding (which may favor some facet types over others), and the conditions under which the crystal formed.

By volume and weight, the largest concentrations of crystals in the Earth are part of its solid bedrock. Crystals found in rocks typically range in size from a fraction of a millimetre to several centimetres across, although exceptionally large crystals are occasionally found. As of 1999, the world’s largest known naturally occurring crystal is a crystal of berylfrom Malakialina, Madagascar, 18 m (59 ft) long and 3.5 m (11 ft) in diameter, and weighing 380,000 kg (840,000 lb).[5] 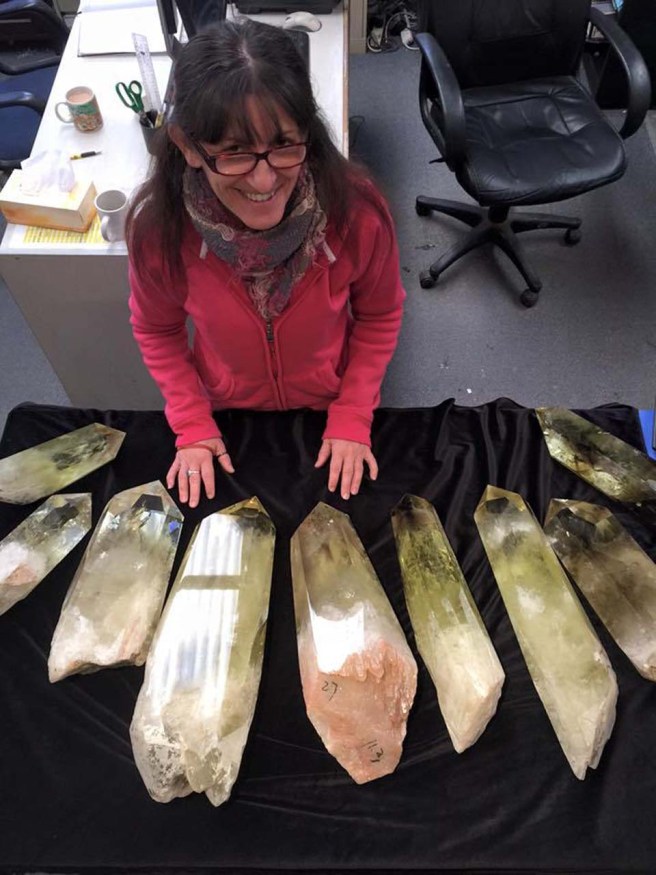 Some crystals have formed by magmatic and metamorphic processes, giving origin to large masses of crystalline rock. The vast majority of igneous rocks are formed from molten magma and the degree of crystallization depends primarily on the conditions under which they solidified. Such rocks as granite, which have cooled very slowly and under great pressures, have completely crystallized; but many kinds of lava were poured out at the surface and cooled very rapidly, and in this latter group a small amount of amorphous or glassy matter is common. Other crystalline rocks, the metamorphic rocks such as marbles, mica-schists and quartzites, are recrystallized. This means that they were at first fragmental rocks like limestone, shale and sandstone and have never been in a molten condition nor entirely in solution, but the high temperature and pressure conditions of metamorphism have acted on them by erasing their original structures and inducing recrystallization in the solid state.[6]

Other rock crystals have formed out of precipitation from fluids, commonly water, to form druses or quartz veins. The evaporites such as halite, gypsum and some limestones have been deposited from aqueous solution, mostly owing to evaporation in arid climates.

Water-based ice in the form of snow, sea ice and glaciers is a very common manifestation of crystalline or polycrystalline matter on Earth.  A single snowflake is typically a single crystal, while an ice cube is a polycrystal.

The same group of atoms can often solidify in many different ways. Polymorphism is the ability of a solid to exist in more than one crystal form. For example, water ice is ordinarily found in the hexagonal form Ice Ih, but can also exist as the cubic Ice Ic, the rhombohedral ice II, and many other forms. The different polymorphs are usually called different phases.

In addition, the same atoms may be able to form noncrystalline phases. For example, water can also form amorphous ice, while SiO2 can form both fused silica (an amorphous glass) and quartz (a crystal). Likewise, if a substance can form crystals, it can also form polycrystals.

For pure chemical elements, polymorphism is known as allotropy. For example, diamond and graphite are two crystalline forms of carbon, while amorphous carbon is a noncrystalline form. Polymorphs, despite having the same atoms, may have wildly different properties. For example, diamond is among the hardest substances known, while graphite is so soft that it is used as a lubricant.

Polyamorphism is a similar phenomenon where the same atoms can exist in more than one amorphous solid form.

Crystallization is the process of forming a crystalline structure from a fluid or from materials dissolved in a fluid. (More rarely, crystals may be deposited directly from gas; see thin-film deposition and epitaxy.)

Crystallization is a complex and extensively-studied field, because depending on the conditions, a single fluid can solidify into many different possible forms. It can form a single crystal, perhaps with various possible phases, stoichiometries, impurities, defects and habits. Or, it can form a polycrystal, with various possibilities for the size, arrangement, orientation and phase of its grains. The final form of the solid is determined by the conditions under which the fluid is being solidified, such as the chemistry of the fluid, the ambient pressure, the temperature, and the speed with which all these parameters are changing.

Specific industrial techniques to produce large single crystals (called boules) include the Czochralski process and the Bridgman technique. Other less exotic methods of crystallization may be used, depending on the physical properties of the substance, including hydrothermal synthesis, sublimation, or simply solvent-based crystallization.

Large single crystals can be created by geological processes. For example, selenite crystals in excess of 10 meters are found in the Cave of the Crystals in Naica, Mexico.[7] For more details on geological crystal formation, see this link.

Crystals can also be formed by biological processes, see this link. Conversely, some organisms have special techniques to prevent crystallization from occurring, such as antifreeze proteins.